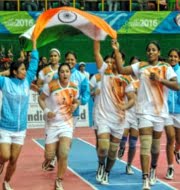 Indian women’s beach kabaddi team has won the gold medal at the 5th Asian Beach Games held in Danang, Vietnam.
In the final match, Indian team defeated Thailand by 41-31 score.
With this, Indian women’s kabaddi team has won the title for the record fifth time in succession. For Thailand, it was the fifth time in a row they had lost to India in a final.
The Indian women’s kabaddi team won the gold medal since the inception of the biennial Games in 2008.
Earlier in women’s 70kg category kurash (a form of wrestling originated in Uzbekistan), Amisha Tokas had won a silver after losing to Nguyen Thi Lan of Vietnam in the final.
In beach bodybuilding, India’s Manoj Kumar Majumdar also had won a bronze medal in upto 158cm category.
So far, India has won six medals (1 gold, 3 silver, 2 bronze) in the Games and is at 15th spot in the medal table which is headed by hosts Vietnam (25 gold, 22 silver, 27 bronze).