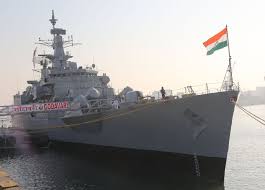 Indian Navy’s indigenously built warship INS Ganga (F22) was decommissioned in Mumbai, Maharashtra after over three decades of service. The warship was commissioned in December 1985 and had represented big step forward in India’s indigenous warship building capability. The decommissioning ceremony was attended by several officers and men, many now retired, who had served on board ship.

INS Ganga (F22) was a Godavari-class guided-missile frigate of the Indian Navy. It was built by Mazagon Dock Limited, Mumbai and was commissioned into Indian Navy on 30 December 1985. The Godavari class was first indigenous warship design and development initiative of Indian Navy.
The warship along with Shakti and INS Godavari  were deployed to Somalian capital Mogadishu in December 1994 to support withdrawal of Indian Army’s 66 Brigade, including the 2nd Battalion, Jammu & Kashmir Light Infantry (2 JAKLI).