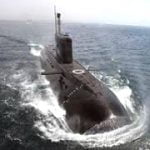 Indian Navy successfully test-fired an anti-ship missile for the first time from an indigenously built INS Kalvari submarine.
During a test firing in the Arabian Sea, the missile successfully hit a surface target at extended ranges. This launch is considered as significant milestone of Indian Navy in enhancing its “sub-surface” warfare prowess.

What is Air Independent Propulsion? How is it used in Submarines?

The Defence Research Development Organisation recently achieved a milestone in the development of Ai...