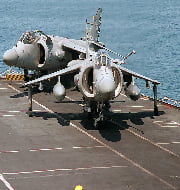 Indian Navy has decommissioned its aging fleet of iconic Sea Harriers at a function organised at INS Hansa base in Vasco, Goa.
The Harriers will be replaced by a squadron of Russian MIG 29k jets and the retired aircrafts will be put on display in museums.