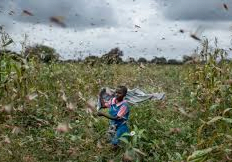 The Indian Air Force has developed an airborne locust control system that can be integrated with Mi-17 helicopters.

The Union Ministry of Agriculture and Farmer Welfare has signed an agreement with the UK firm to modify Mi-17 helicopters to spray pesticides in order to control locust breeding. The modified aircrafts are to be supplied by September 2020.

The pesticide Malathion is to be used as spraying agent. The modified helicopters are to be fitted with an auxiliary tank of 800 litres. The pesticides from the tank will be pumped into nozzles using an electrical pump in the system. The nozzles were developed by CSIO of Chandigarh.

The system is capable of spraying pesticides for 40 minutes covering 750 hectares of land.

India is currently facing worst locust outbreaks in decades with swarms attacking the western states. According to the Food and Agriculture Organization, the locust threats are to continue till July. Usually, the locusts enter through the desert areas of the country in June-July. This year they have reached earlier in March-April.