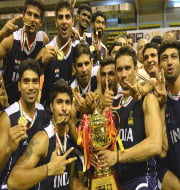 Defending champions India have retained the South Asian Basketball Championship (SABA) title. It was the 4th edition of the Championships.
In the final match of played at Kanteerava Stadium in Bengaluru, Karnataka they defeated Sri Lanka by 93-44 score. With this win India qualified for the FIBA Asia Championship which will be hosted by China in September 2015.
Results of SABA title 2015: India (gold), Sri Lanka (silver) and Nepal (bronze).