India, US and Japan navies kick off 2017 Malabar Exercise 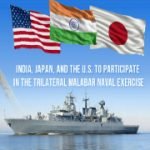 India, Japan and United States (US) navies have kicked off 2017 MALABAR trilateral naval Exercise near Chennai in Bay of Bengal. This year it is the 21st edition of the naval exercise.
In this edition of the exercise, total of around 15 warships, two submarines and scores of fighter jets, surveillance aircraft and helicopters from three navies will take part.

The 8 day long Malabar 2017 exercise consists of both ashore and at-sea activities. This year operations of the exercise include anti-submarine warfare, familiarization with inter-operability between maritime forces, search and rescue and seizure missions and many other drills.
One of the main goals of this edition of the exercise is “submarine-hunting”. The goal carries subtext given the ever-increasing and regular operation of Chinese Navy submarines in the Indian Ocean.
This year, two aircraft carriers from India and US and a Japanese helicopter destroyer form part of the warships that will join the naval drills.
Participants from US Navy include the Nimitz-class aircraft carrier USS Nimitz with embarked Carrier Air Wing 11; guided-missile cruiser USS Princeton; guided-missile destroyers USS Howard, USS Shoup and USS Kidd; a P-8A Poseidon surveillance aircraft; and a Los Angeles-class fast-attack submarine.
From Indian Navy, aircraft carrier INS Vikramaditya is participating for the first time. Two Kamorta class anti-submarine warfare corvettes, two Shivalik class frigates and tanker INS Jyoti are also participating. The Japan Maritime Self Defence Force (JMSD) ships JS Izumo and JS Sazanami are participating in the exercise.

Malabar Exercise began as an Indo-US bilateral naval drill in 1992. Since then it is held annually. Japan had formally joined the exercise as a permanent participant in 2015. The primary aim of this multilateral exercise is to increase interoperability amongst the three navies and develop common understanding of procedures for Maritime Security Operations and deepen defence relations. In 2007, the exercise also saw participation of Australia and Singapore. All the participating nations in the exercise have clarified earlier that the Malabar series is not aimed at any specific country.