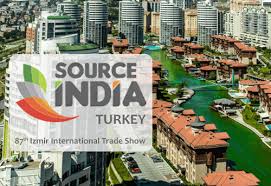 India was the focus country of 87th Izmir International Trade Show held in Izmir, third most populous city in Turkey, after Istanbul and Ankara from 7th to 11th September, 2018. Trade Promotion Council of India (TPCI) had led 75-member Indian delegation for this trade show.

In this tradeshow, India also had displayed mega business standalone pavilion ‘Source India’. This pavilion had hosted 75 Indian companies with aim of tie-ups in order to increase India’s exports to Turkey and other neighbouring countries. It had showcased multi-product pavilion, including companies displaying products like ceramics, cereals and mechanical appliances. This pavillion was part of series of Source India pavilions that TPCI is hosting in important tradeshows across the world for boosting India’s exports.
TPCI: It is trade and investment promotion organization of Department of Commerce, Union Ministry of Commerce & Industry. It works to open new areas for co-operation in trade and investment between India and rest of the world.