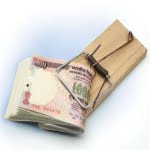 As per analysis of the latest figures compiled by the Zurich based SNB (Swiss National Bank) as on 2016-end, India has slipped to the 88th place in terms of money parked by its citizens with Swiss banks.
The analysis shows that the money officially held by Indians with banks in Switzerland now accounts for a meagre 0.04% of the total funds kept by all foreign clients in the Swiss banking system.
The latest data from the SNB comes ahead of a new framework for automatic exchange of information singned between Switzerland and India to help check the black money menace. The funds mentioned are the official figures and do not indicate the quantum of black money.

The total money held in Swiss banks by foreign clients from across the world, incidentally rose by a small margin to 1.42 trillion Swiss francs (CHF) during 2016 from 1.41 trillion CHF in 2015.
In terms of individual countries, United Kingdom accounted for the largest chunk at about CHF 359 (over 25%) of the total foreign money with Swiss banks. The US came second with nearly CHF 177 billion (about 14%).  Besides, UK and US, no other country accounted for a double-digit percentage share. The top-ten countries included West Indies, France, Bahamas, Germany, Guernsey, Jersey, Hong Kong and Luxembourg.
India was ranked in top-50 continuously in terms of holdings in Swiss banks between 1996 and 2007, but it started declining after that and was placed at 55th in 2008, 59th in 2009 and 2010 each, 55th again in 2011, 71st in 2012, 58th in 2013, 61st in 2014 and  75th in 2015. It was ranked highest at 37th place in 2004.
Among the five BRICS nations, India was also the lowest ranked. Russia was ranked 19th (CHF 15.6 billion), China 25th (9.6 billion), Brazil 52nd (2.7 billion) and South Africa 61st (2.2 billion). Among them only China has moved up.
Among India’s neighbouring countries, Pakistan was ranked 71st place (with about CHF 1.4 billion), Bangladesh was 89th (667.5 million), Nepal was 150th (312 million), Sri Lanka was 151st (307 million) and Bhutan was 282nd (half a million Swiss francs).
The total money belonging to the developed countries fell to CHF 824 billion, while those from developing nations actually rose marginally to CHF 208 million.  The money from developing economies in Asia-Pacific region rose to CHF 50 billion.
The funds parked in Swiss banks from offshore financial centres rose to CHF 389 billion.  The offshore financial centres that ranked higher including Cayman Islands, Panama, Marshall Islands, Cyprus, Bermuda, Seychelles, Isle of Man and Gibraltar.