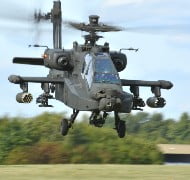 Aircraft were formally inducted at induction ceremony held at Pathankot Air Force station with Air Chief Marshal B S Dhanoa as the chief guest. The ceremonial key was handed over by Boeing company.

Apache helicopters are being purchased to replace Mi-35 fleet. These helicopters will be deployed in Western regions of India.

Background: In September 2015, IAF had signed a multi-billion dollar contract with US government and Boeing Ltd for 22 Apache helicopters. The first 8 helicopters have been delivered on schedule and last batch of helicopters is to be delivered by March 2020.

It is one of world’s most advanced multi-role combat helicopters, and is flown by the US Army.

It has capability to shoot fire and forget anti tank guided missiles, air to air missiles, rockets and other ammunitions.

It is also capable of delivering variety of weapons such as: air to ground Hellfire missiles, 70 mm Hydra rockets and air to air Stinger missiles.

It has modern EW (Electronic Warfare) capabilities to provide versatility to helicopter in a network centric aerial warfare.

It also carries one 30 mm chain gun with 1200 rounds as part of area weapon sub system.

To add to lethality of helicopter, it carries fire control radar that has a 360° coverage and nose mounted sensor suite for target acquisition as well as night vision systems.

These are day/night, all weather capable and have high agility and survivability against battle damage.