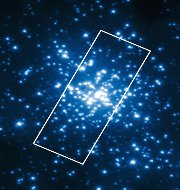 The scientists at the Indian Institute of Astrophysics (IIA) have studied the stars of Omega Centauri cluster and found some Helium-enhanced cool bright stars that are present among the metal-rich sample of the cluster. IIA is an autonomous institute of the Department of Science and Technology, Government of India.

Significance of the Findings

This is the first time the scientists have observed the presence of Helium in the Omega Centauri cluster and this may lead to some serious observations in the future regarding this. The findings of the scientists have been published in ‘The Astrophysics Journal’. It gives an idea for HE-enhanced population origin.

Details of the Study

Based in Bangalore, it is an autonomous research organization financed by the Department of Science and Technology, Government of India. It conducts research in the areas of astronomy, astrophysics and related spheres. It has a network of laboratories and observatories in the country. It was instrumental in the Astosat project, the first-ever dedicated multi-wavelength space observatory of the country.

What is Omega Centauri?

It is a global cluster in the constellation of Centaurus. It was discovered by Edmond Halley in 1677. Situated at a distance of 15800 light-years from the earth, it is the largest globular cluster in the Milky Way. This contains around 10 million stars.