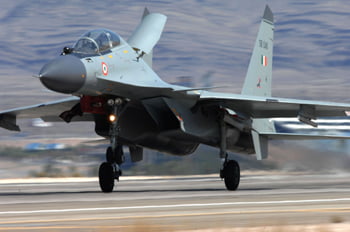 In response to the recent crash of a Sukhoi-30 plane in Pune, the Government has ordered the grounding of India’s entire fleet of Sukhoi-30 airplanes pending technical checks on each of them.

A Sukhoi-30 MKI had crashed in a field near Pune. The accident is still under investigation, however, the preliminary findings have suggested that a technical problem in the fly-by-wire system was the cause of the accident and not human error. A Court of Inquiry on the accident is also in progress.

Around 200 twin engine Sukhoi-30s have been grounded pending technical review. Notably, this has been the fifth accident involving a Sukhoi-30 MKI since 2009, and the Sukhoi-30 fleet has been grounded twice before.
The grounded fleet accounts for almost one-third of India’s fighter fleet. The Air force will now have only 34 active combat squadrons (with each squadron having 18 fighter planes), as opposed to the authorized strength of 44.