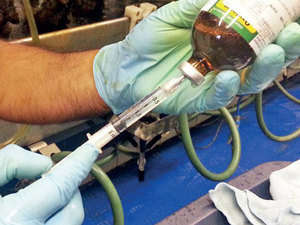 The Union Ministry of Health and Family Welfare has banned manufacture and sale of Oxytocin drug formulations for domestic use in private sector to prevent its misuse from 1st July 2018. Its import also has been banned. It also has not allowed retail or wholesale chemists to stock this drug in their shops in any form or name. Jenceforth, Karnataka Antibiotics & Pharmaceuticals Ltd will only manufacture the drug and supply it directly to registered private and public hospitals.

Oxytocin, often called love hormone, is released naturally in human bonding activities such as childbirth , breastfeeding and sex,. It is uterine stimulant hormone, prescribed for initiation of uterine contractions and induction of labour in women as well as stimulation of contractions during labour. It is also used to help abort fetus in cases of incomplete abortion or miscarriage, and control bleeding after childbirth. It may be used for breast engorgement.

It has become controversial hormonal injection that is misused widely in the dairy industry, agriculture and horticulture. The drug’s abuse in dairy animals to make them release milk at a time convenient to farmers, shortens their lives and makes them barren sooner. The hormone is also used to increase size of vegetables such as pumpkins, watermelons, brinjals, gourds and cucumbers. Even its misuse is reported among trafficked children, injected to accelerate puberty among girls. It is also being misused to speed up deliveries for pregnant women in overcrowded government hospitals.