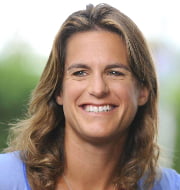 France`s tennis legend Amelie Mauresmo was inducted into the International Tennis Hall of Fame by the Association of Tennis Professionals (ATP).
She is a two-time Grand Slam winner viz. Australian Open (2006) and Wimbledon (2006). She is also former world number one and had spent a total of 39 weeks atop in the rankings in 2004 and 2006. She also had won a Silver Medal at the 2004 Summer Olympics.
She is third French women tennis player to win a Grand Slam title in the Open Era. Others are Mary Pierce and Marion Bartoli.
Her professional tennis career spanned more than fifteen years and had officially retired from in December 2009. Since June 2014, she is coaching Andy Murray.
Besides Amelie Mauresmo, 6 time Paralympic medallist David Hall of Australia was also induction into the International Tennis Hall of Fame.