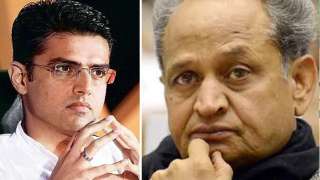 Rajasthan Legislative Assembly Election, 2018 was held on 7 December 2018 in a single phase. The election resulted in win of Indian National Congress and consequently, senior congress leader Ashok Gehlot was selected to be Chief Minister of the state. Some exam oriented questions & answers:

Structure of Legislature of Rajasthan

Rajasthan has a unicameral legislature and thus has only one house called Vidhan Sabha or Legislative Assembly, located in Jaipur, the state capital.

The current strength of Rajasthan Assembly is 200 members. To form a government, a party or coalition needs 101 seats in the house.

The recent election was held for 199 seats of the state (1 seat is for nomination by Governor). The seat composition is as follows:

Since 1949, 14 people have served as Chief Minister of Rajasthan. Some important facts are as follows:

Ashok Gehlot has recently become the chief minister of the state for third time. He entered into politics in early 1970s and has been active in both centre and state politics. He served as Union Minister in Indira Gandhi, Rajiv Gandhi as well as Narsimharao governments. His first term as Rajasthan CM was from 1998 to 2003, while second term was from 2008 to 2013. Currently, he represents Sardarpura constituency.

Sachin Pilot was member of 15th Lok Sabha representing the Ajmer constituency. He has also served as Minister of Corporate Affairs UPA-II government under Manmohan Singh. At present, he is the President of the Rajasthan Pradesh Congress Committee. He has been selected to be deputy chief minister of the state for the first time.