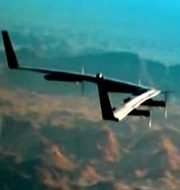 Social networking giant Facebook’s Internet drone named ‘Aquila’ has passed first full-scale test. This was the first time using the full-scale drone.
The flight test was undertaken in Yuma, Arizona (US) and was only meant to last for 30 minutes. But the test went so well that the plane was kept flying for up for 96 minutes.