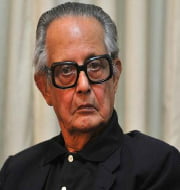 Eminent cartoonist, illustrator and humorist Rasipuram Laxman passed away in Pune. He was 94.