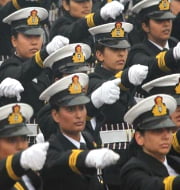 Delhi High Court in its landmark judgment has allowed women to get permanent commission in Indian Navy and allowed them to board on warships.
The ruling was given by a Division Bench of Delhi HC headed by Justice Kailash Gambhir on the writ petition moved by a group of women naval officers both retired and serving.
The HC also ruled that, henceforth female naval officers will have full term service in the Indian Navy and also enjoy retirement benefits same as their male counterparts.
Presently, Indian Army and Air Force allow permanent commission for female officers. While, Indian Navy has limited the role of women officers serving in short service commission of 14 years.
In case of Navy, female officers are only allowed to serve in the administrative, medical and education branches. They are also working as observers, to monitor censors on aircrafts.
Implications: It will eliminate the gender discrimination and ensure the rights of women officers  in Indian Navy similar to their counterpart in other forces. To follow up the ruling of Delhi High Court, Indian Navy now has to review its rules banning women on warships.
Note: Women in Indian army and the Air Force were allowed permanent commission by the Delhi High court in its ruling of 2010.