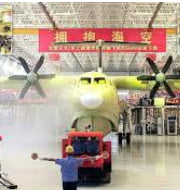 China has completed the production of the world’s largest amphibious aircraft dubbed as the AG600.
It was unveiled by the state-owned Aviation Industry Corporation of China (AVIC) in the southern port city of Zhuhai.
Key Features of AG600

Note: The wingspan of AG600 is considerably smaller than that of the H-4 Hercules which was designed in the 1940s to carry Allied troops into battle. It was also known as the Spruce Goose and was regarded as by far the largest seaplane ever built. It had made one only flight in 1947.