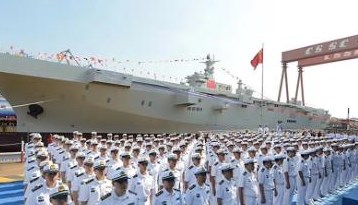 China has launched its first amphibious assault ship in Shanghai. This ship would enable ground forces to carry out attacks on enemy territory from sea. It is independently developed by China and has a strong capacity in amphibious operations as well as performing a variety of tasks.

The new ship is the first in Type 075 class of amphibious assault ship, which is also defined as a type of landing helicopter dock.

After undergoing equipment debugging, mooring and navigational, the ship will have a strong capability to carry out amphibious combat and other tasks.

Since in power, Chinese President Xi Jinping has advocated a new military doctrine as per which the 2.3 million Chinese military (largest in the world), has reduced the size of its army by 3 lakhs in last few years and expanded its navy and air force manifold to enhance its global influence.

Also, since 2013 China, in a major reorganization of its military doctrine has increased development of its navy (People’s Liberation Army (PLA) Navy), which included building several aircraft carriers besides submarines, assault ships and frigates as part of its efforts to expand its global influence.

The Chinese Navy’s has one aircraft carrier- the Liaoning, which was commissioned in 2012. Moreover, PLA Navy’s 2nd indigenously built aircraft carrier is currently undergoing trials and 3rd one is being built at furious pace. China now also plans to acquire about 5-6 aircraft carriers in the coming years.

Currently, China has 20 Type 052Ds destroyers, either in active service or being fitted out for service soon. The Destroyers are fast, highly manoeuvrable long distance warships which are also used to accompany aircraft carriers.