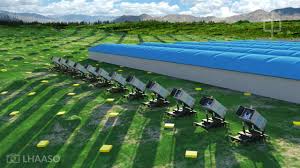 The Chinese scientists are constructing a huge cosmic ray observation station that is equivalent to 200 soccer fields in Sichuan province. The observatory is located 4,400 meters above sea level.

Cosmic Rays are atom fragments that rain down on the surface of the earth from the outer space. The study on Cosmic rays are important as they carry source of information about the origin of the universe. The cosmic rays can also be used for applications outside astronomy. In 2017, a team of scientists found a void at the The Great Pyramid of Giza using cosmic rays.