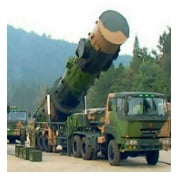 For the first time, a canisterised version of Agni-V missile was successfully test-fired on 31 January 2015 from Wheeler Island off Odisha coast.
This was the third successful flight test of the Inter-Continental Ballistic Missile (ICBM) and the first canister trial.
Test: The missile was launched from sealed canister, mounted on a TATRA truck. It was carrying dummy payload. Test showed that dummy payload withstand temperatures more than 3,0000 C and hit the target at pre-designated point in the Indian Ocean.
Implication: A canister-launch system of Agni-V missile will give the forces the requisite operational flexibility. With this system, ballistic missile can be transported and can launched from any place.