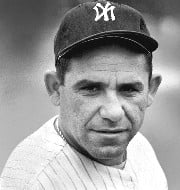 Baseball legend Yogi Berra from United States has passed away. He was  90.
His humorous quotes had made him one of America’s most beloved sports icons. He also had inspired the famous cartoon character of Yogi Bear.