Archaeologists plan to use LIDAR to study ancient Rajgir hills 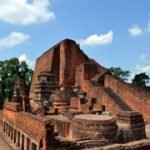 Indian archaeologists are planning to use Light Detection and Ranging (LIDAR) technology to survey the archaeological evidence, flora and fauna in the ancient Rajgir hills in Bihar.
The LIDAR devices mounted on drones or on helicopters will be deployed as part of the inter-disciplinary Rajgir Archaeological Survey Project (RASP).
RASP is a collaborative project between the Bihar Heritage Development Society and Nalanda University in co-ordination with Bihar’s Ministry of Art, Culture and Youth. It is considered as the most comprehensive survey ever conducted in that region.
Key Facts

LIDAR is a remote-sensing technique that uses high-end scanning laser light to sample the surface of the earth.
What is significance of Rajgir hills?
Rajgir hills in Nalanda district of Bihar is an area associated with Buddha. It has complex of temples and monasteries. It is one of India’s most important tourist places for Buddhist pilgrims. The ancient city of Rajgir was the first capital of the Magadha empire. Buddha had spent many years in Rajgir and also delivered sermons here. His teachings were also penned at Rajgir. It was also the venue for the first Buddhist Council. The region is also associated with Jainism.