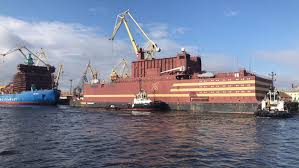 Russia unveiled world’s first floating nuclear power station at  port city of Murmansk. It will be loaded with nuclear fuel at Murmansk and will be towed to port of Pevek in autonomous Chukotka region in Russia’s far northeast in Arctic Circle region.

Akademik Lomonosov was constructed by Russian state nuclear power firm Rosatom. It has length of 144 metres and width of 30 metres. It has displacement of 21,500 tonnes and crew of 69 people. For power generation, it has been fitted with two modified KLT-40 naval propulsion nuclear reactors (each of 35 MW capacity) together providing up to 70 MW of electricity and 300 MW of heat. It is named after Russian Academician Mikhail Lomonosov.
It has latest security systems and is considered as one of safest nuclear installations in the world. However, environmentalists have dubbed it as ‘nuclear Titanic’ or ‘Chernobyl on ice’. It will be primarily used to power oil rigs in remote areas of Artic region where Russia is pushing to drill for oil and gas.

The low-capacity, mobile (floating) nuclear power plant can produce enough electricity to power town of 200,000 residents living in Russia’s far-flung northernmost Artic region where large amounts of electricity is not needed’ and construction of conventional power station based on coal, gas and diesel is complicated and costly. It can save upto 50,000 tonnes of carbon dioxide emissions per year.
The project is part of Russia’s greater aims to secure rich deposits of oil and gas in North Pole region in Artic. Due to climate change, new shipping routes are opening up in Russia’s north and as result, it is strengthening its military position in the region.