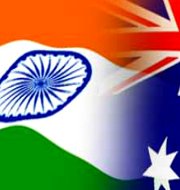 India and Australia held their first ‘2+2 dialogue’ in New Delhi and highlighted need to maintain Asia-Pacific region as a “free” and “open” zone. The 2+2 dialogue model between both countries included foreign and defence secretaries.
India and Australia share warm bilateral relations based on shared democratic values and pluralism. There is a growing convergence of strategic perspectives between the two countries.

It was first meeting of this level since the two sides participated in quadrilateral discussion between India, United States, Australia and Japan in Manila in November 2017 for new strategic partnership targeting the Asia-Pacific region. In the 2+2 dialogue, all aspects of bilateral relations with focus on strategic and defence relations between two countries were reviewed.
Both countries agreed that free, open, prosperous and inclusive Indo-Pacific region serves the long-term interests of all countries in the region and of the world at large. The dialogue indicated that focus remains on freedom of navigation in South China Sea, where China has been reclaiming land for infrastructure, boosting its maritime influence.