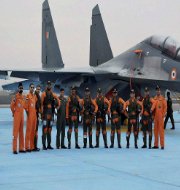 The multilateral Red Flag Aerial combat exercises between US, NATO and allied forces and India Air Force (IAF) concluded in Alaska, US.
The four-week long (from April 28 to May 13, 2016) aerial combat exercises was held at the Nellis Air Force Base, Alaska. This was the second time India had participated in such an exercise after 2008.
Key facts