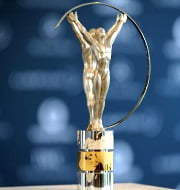 World No 1 tennis player Novak Djokovic from Serbia has won the 2016 Laureus Sportsman of the Year Award. He has won it for second time after winning it in 2012.
US tennis legend Serene Williams has won the 2016 Laureus Sportswoman of the Year Award. It was her fourth Laureus Awards after she won it in 2003, 2007 and 2010.
The 2016 Laureus World Sports Awards ceremony for the first time was held in Berlin, Germany. The awards are dubbed as Oscar of the sports and are bestowed on sportspersons in different categories.
2016 Laureus World Sports Awardees