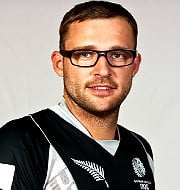 New Zealand cricketer and former captain Daniel Vettori has announced his retirement from international cricket.
He made this announcement after playing last match in ICC World Cup 2015 Final against Australia. Earlier in 2011, he had retired from Tests and Twenty-20s cricket format.
He had started his international cricket career in 1996–97 at the age of 18. He was the youngest player to represent New Zealand in Test cricket. He was considered as New Zealand’s most-capped test cricketer.
In his one day international’s (ODIs) career he had played in 295 matches and had batted in 187 innings. He had scored 2253 runs in ODIs. He also had bowled in 277 ODI innings and took 305 wickets. He took his 300th ODI wicket against Afghanistan at Napier during the just-concluded ICC World Cup 2015, becoming the 12th bowler to achieve the mark.
In his test career, Vettori has played in 1113 matches and had batted 174 innings and had scored 4531 runs. His highest score was 140. In test career, he had bowled in 187 innings and took 362 wickets. He is eighth player achieve 300 wickets mark in test cricket and to score 3000 runs.
Vettori had captained New Zealand’s International cricket team from 2007 to 2011.