What is Suez Canal Blockade? 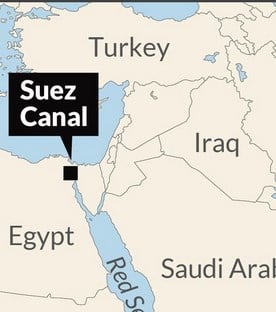 A container ship called the “Ever Given” recently ran aground in the Suez Canal. This blocked more than 400 ships from transiting the canal. The blockage created huge impacts on global trade and is referred to as Suez Canal Crisis 2021 or Suez Canal Blockade.

Impacts of the Blockade

The Cargo ship was headed from China to Netherlands. It had run aground in the canal and got stuck for a week. The global trade losses due to the blockage is estimated to be 9 billion USD.

The Government of India had framed a 4-Point Plan to deal with the Suez Canal Blockade. The plan included prioritization of cargo, advisory to ports, freight rates and re-routing of ships. The plan mainly focuses on reducing Indian trade losses due to the blockage.

Under prioritization of cargo, the APEDA, MPEDA and FIEO will work together and identify perishable cargo for priority movement.

The Suez Canal connects Mediterranean Sea and the Red Sea. The canal was officially opened in 1869. Until 1956, the canal was primarily owned by the European shareholders (mostly British and French) and partly by the Egyptian Government. In 1956, the then President of Egypt Gamal Abdel Nasser nationalized the canal. This led to Suez Canal Crisis.

It is also called Suez Crisis or the second Arab-Israeli war. In Israel, it is called the Sinai war and in the Arab world it is called the Tripartite Aggression. The motive of the aggression was to regain the control of Suez Canal and remove President Nasser who had nationalized the canal. The aggression against Egypt was started by Israel followed by UK and France. The three allies succeeded in capturing the canal. However, there was huge pressure from the US and the Soviet Union against the invasion.

The crisis led to the closure of the canal between October 1956 and March 1957. Due to the conflict, the UN created the United Nations Emergency Force Peacekeepers. The force polices Egyptian-Israeli border.

The British Prime Minister Anthony Eden resigned due to the crisis. The Canadian External Affairs Minister Lester Pearson won the Nobel Peace Prize for his efforts to end the conflict.