What is Keystone Pipeline Project? 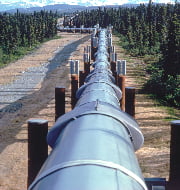 The US president elect Joe Biden is expected to cancel the Keystone XL pipeline project.

The keystone pipeline system is an oil pipeline system in the United States and Canada. It was commissioned in 2010 and is owned by the Government of Alberta and TC Energy. The pipeline runs from the Western Canadian sedimentary basin in Alberta to the Refineries in Texas and Illinois.

The major environmental concern raised against the project is that the pipeline spill will threaten Ogallala aquifer. Ogallala aquifer is one of the largest freshwater reserves in the world. It supports more than 2 million people by providing drinking water to them. Also, the aquifer supports 20 billion USD of agricultural activities. It is located beneath The Great Plains in the United States.

The environmental organisations also opposed the project due to its transportation from Oil Sands. The oil Sands are technically called bituminous sands. These are unconventional petroleum deposits. They occur naturally in the mixture of sand, water, and clay. The petroleum in oil sands is highly viscous. Large quantities of natural bitumen deposits are found in Russia, Venezuela, Canada and Kazakhstan.

The major concern of extracting Petroleum from oil sands is that it releases 17% more greenhouse gas emissions than the conventional oil extraction.