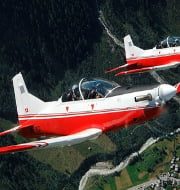 The indigenous Basic Trainer Aircraft HTT-40 is set to be unveiled during the 12th edition of the DefExpo on October 19, 2022.