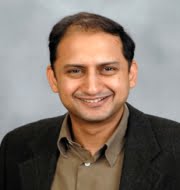 The Union Government has appointed Viral V Acharya (42) as new Deputy Governor at the Reserve Bank of India (RBI).  He will have regular three-year tenure.
His appointment was cleared by the Appointments Committee of the Cabinet (ACC) chaired by Prime Minister Narendra Modi in New Delhi.
He will fill the post that fell vacant after Urjit Patel after he was made RBI Governor to succeed Rajan with effect from September 2016. The existing three Deputy Governors of RBI are S S Mundra, R Gandhi and N S Vishwanathan.