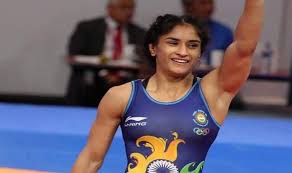 The Indian wrestler, Vinesh Phogat, has won the gold medal in women’s 53-kg category. She won the medal at XXIV Outstanding Ukrainian Wrestlers and Coaches Memorial in Kyiv, Ukraine.

In the event, the Indian Wrestler, Vinesh Phogat, defeated the world number seven, Vanesa Kaladzinskaya from Belarus in the finals match. It was a fight to win the gold medal. After winning the wrestling match, she made a winning return to her first competitive outing played after the lockdown imposed during the Covid-19 pandemic. Now the 26-year-old wrestler will be back into action in the first ranking tournament of the season from March 4 to March 7, 2021 in Rome.

The Asian Games and Commonwealth Games gold medallist defeated the Ana A from Romania by fall in the semi-final to qualify for the final summit clash. The wrestler also booked her place in the Tokyo Olympics recently for the 53 kg category. She is the only Indian woman wrestler who have qualified for the Tokyo Games.

The 2020 Summer Olympics is also known as Tokyo 2020. It is an upcoming international multi-sport event which has been scheduled to held from July 23 to August, 8 2021 in Tokyo, Japan. It was earlier scheduled from July 24 to August 9, 2020. But it was postponed in March 2020 because of COVID-19 pandemic. The event retains its name “Tokyo 2020” even though it has been rescheduled for 2021. The Olympic Games have been postponed and rescheduled for the first time rather than cancelled.

There are leading international sporting events that features the summer as well as the winter sports competitions. In the event, thousands of athletes across the world participate in several number of competitions. These games are considered as the world’s foremost sports competition in which more than 200 nations participates. The Games are normally held after four years in the Summer while the Winter Olympics are held every two years with in the four-year period.