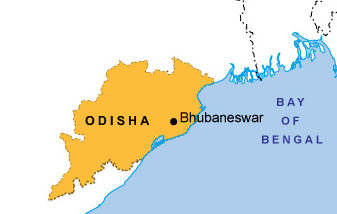 Odisha has come out with a unique flood hazard atlas aided by satellite imagery, which is expected to help the coastal state manage floods more efficiently. The atlas was released by Odisha Chief Minister Naveen Patnaik at the State-level Natural Calamity Meeting.

Need: Atlas would serve as a useful resource of information for policy makers, planners and civil society groups.

Base Period: Atlas is compiled on basis of historic flood inundation captured via satellite imagery over 18 years period from year 2001 to 2018.

Firstly, all satellite data sets were analysed and flood layers were extracted from it, then all flood layers corresponding to a particular year were combined into one inundation layer, so that this layer represents maximum flooded area in 1 year period.

Then all such combined flood layers for a period of 18 years were integrated into flood hazard layer representing observed flood-inundated areas with different frequencies. This layer was integrated with digital database layers of Odisha.

Floods in Odisha: Every year vast areas of Odisha are inundated when there is flooding in major rivers of state, viz. Mahanadi, Subarnarekha, Brahmani, Rushikulya and Baitarani. Also, as per Odisha State Disaster Management Authority (OSDMA), damages due to floods are mainly caused by Mahanadi, Brahmani and Baitarani, which have a common delta where floodwaters intermingle and when in series simultaneously cause havoc.

Flash Floods: Few districts in western and southern part of Odisha are prone to flash floods which are caused due to instant run-off from hilly catchments areas of rivers like, Vamsadhara and Budhabalanga.

Hazard Prone: The entire coastal belt is prone to storm surges, which is commonly accompanied by heavy rainfall which then makes estuary region vulnerable to both storm surges and river flooding. Few districts in Odisha’s western and southern part of are prone to flash floods.