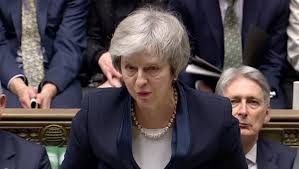 Only two weeks are left for the United Kingdom to leave the European Union in a formal manner. British Parliament is all set for MPs to cast a meaningful vote for the second time after the British PM Theresa May visited Strasbourg for holding talks with Jean-Claude Juncker, the President of European Commission. The leaders later stated that finally, they have been able to reach common ground over the ‘insurance policy’ protocol of the agreement which was designed to keep the border with the island of Ireland open.

PM May has to renegotiate the same as her MPs had rejected the deal by a huge margin of 230 in January 2018.  The deadlock in the British Parliament had led to fears that there will be a no-deal Brexit which will bode bad consequences for both the British economy and people. EU will not have an as significant impact. May has stated on Monday that she was able to finally achieve the ‘legally binding’ changes to the issue which she had been pushing to allay the concerns raised by the hardliners which comprised the Conservatives and also the Democratic Unionist Party. Latter had based their reasoning on the pretext that the so-called backstop will bind the UK to the trade rules of the EU for an indefinite period. They were also against the difference in treatment of Northern Ireland from the UK. It will be of note to see that the changes which are now announced by May will be able to assure the MPs who were either looking for a time limit on the issue or even suggested a unilateral exit for the UK.

Any delay in the Brexit will simply give time for preparing for no deal. This can also call for one more vote on the deal in the time and possibly mean the last chance to get it passed. Any delay will also give a fillip to the demands of another referendum and thus bring huge troubles for the Conservative Party or Brexiteers.

The recent changes which have been introduced actually come in two documents- the first being the joint legally-binding instrument which as per May will let UK raise a complaint with an independent arbitrator if EU plays smart and try to catch the UK in the backstop. The second document is basically an addendum to that part of the deal which will lay out the fundamentals of the relationship between the two sides. It is called the political declaration. It also spells out rules under which both the EU and UK will work to find different arrangements to the current issue.

Juncker had earlier warned that the British MPs will not have any third chance to work on the deal.

Conservative MPs have, however, voiced their concerns about the new agreement that there is still a legal risk that Britain can still get caught in the backstop. They have called for voting to be delayed by over 24 hours for giving enough time to MPs for going through the new agreement and its documents. The government, however, maintains its intention to go ahead with the same.

Labour Party has, however, completely rejected the amendments secured by PM May and has stated that the Parliament still does not find any common ground to support the same. Labour Party is in favour of a second referendum. PM May has stated that if the upcoming meaningful vote stands rejected again, she will conduct two more votes for avoiding a no-deal Brexit.