Syrian Army recaptures historic city of Palmyra from IS 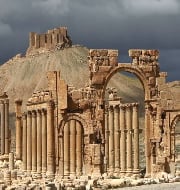 Some facts
Ancient city of Palmyra dates back to the first and second Century when it was under Roman rule. Palmyra was once a Silk Road hub and one of the cultural centres of the ancient world. The city occupies mythological status in Syria and is home to some of the most beautiful and well-preserved ruins of antiquity, including the Temple of Bel, built in 1st century.