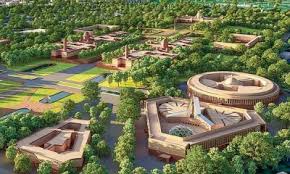 On January 5, 2020, the Supreme Court allowed the Central Vista Project to go ahead.

What is the Central Vista Project?

The Central Vista project aims to renovate 86 acres of land in the Lutyen’s Garden in New Delhi. It includes Landmark structures of Indian government such as Rashtrapati Bhavan, Parliament, India Gate and North and South Block.

What is the background of recent Supreme Court judgement on Central Vista project?

In April 2020, a petition was filed in the Supreme Court challenging the centre’s decision to renovate the 86 acres of Lutyens Garden. According to the petitioner, the decision violated the Right to Life of citizens guaranteed under article 21. This is because the plan deprived people of open and green spaces. Also, the petition argued that the plan violated the Master plan of Delhi 2021.

What were the actions of Supreme Court in response to the petition against the central Vista project?

The Supreme Court heard the challenge on the basis of three main Grounds.  They were violations of Municipal Law, change of land use and violations of environmental law.

Why is a new Parliament required?