Stubble burning down in Punjab, Haryana, UP since 2016 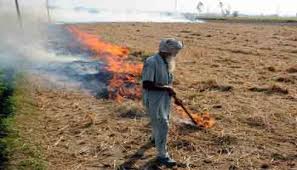 Stubble burning is the setting up of fire to the left over straw that remains after harvesting of paddy, wheat etc. The Government restricted and discouraged this practice. However, it generally helps in killing slugs and pests and can reduce the nitrogen tie-up. The harmful effects are loss of nutrients, pollution from smoke and the risk of fire spreading out of control.  Stubble burning in the states of Punjab, Haryana and UP is the major cause of air pollution in Delhi.  Every year, an estimated quantity of 35 million tons of crop waste being burnt during October and November. Data obtained through NASA fire maps shows that in all the three states, the stubble burning between 2016 and 2019 has come down by 50 per cent compared to four years ago. Since 2016, while Haryana and Uttar Pradesh have seen a sharp and consistent decline in stubble burning, Punjab has been somewhat erratic.  Haryana has managed to bring down its stubble burning by around 55% since 2016. In Uttar Pradesh, there has been a 53 % fall between 2016 and 2019.