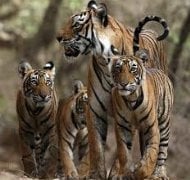 The National Tiger Conservation Authority (NTCA) has approved the creation of the fifth tiger reserve in Tamil Nadu.

The establishment of the tiger reserve will help in the protection of the wildlife and it will also rejuvenation the Vaigai river by protecting the origins of the river in the tiger reserve.

It is also known as the Grizzled Squirrel Wildlife Sanctuary (GSWS). The sanctuary was established in the year 1988 with the objective of protecting the Near threatened grizzled giant squirrel. It is bordered by the Periyar Tiger Reserve in the southwest. The sanctuary is also called as one of the best-preserved forests lying south of the Palghat Gap.