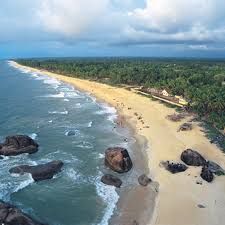 The International Coastal Clean-Up Day encourages people to clean beaches and remove garbage plaguing the beach. The day was started in 1986 by Linda Marnaniss and Kathy O Hara. However, it was established by Ocean Conservancy organization that helps to protect the ocean from challenges being faced every year.

India celebrated the day by launching an eco-label to its BEAMS programme. The programme is implemented by the Integrated Coastal Zone Management project of India. Also, India has recommended eight beaches to the Blueflag certification.

What is coastal regulation zone?

What is high tide line?

The high tide line is the highest line on the land till which the seawater reaches during spring tide.

What is low tide line?

It is the lowest tideline on the land till which sea water reaches during spring tide.

What is Spring tide?

The tide height directly depends on the position of both sun and moon in relation to the earth. When all the three astronomical objects Sun, moon and the earth are in a straight line the tide height will be at their greatest. The tides are then called spring tides. They occur twice a month during full moon period and New Moon period.

The CRZ 2011  notification consolidated several amendments that were made in CRZ 1991. The major objectives of CRZ 2011 were as follows

This notification was based on the Recommendation of Shailesh Nayak committee. It was constituted by the Ministry of environment forest and climate change in June 2014.