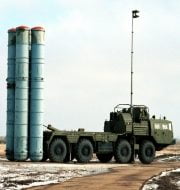 The deal will be announced before annual summit between Prime Minister Narendra Modi and Russian President Vladimir Putin in October 2018. Now both countries are now trying to find way out to evade provisions of CAATSA (Countering America’s Adversaries Through Sanctions Act), a stringent US law that seeks to punish countries and entities engaged in transactions with defence or intelligence establishment of Russia.

India wants to procure long-range missile systems to tighten its air defence mechanism, particularly along its nearly 4,000-km-long border. In 2016, India had signed agreement with Russia on Triumf interceptor-based missile system. But there has been mounting concerns in India over US sanctions against Russian defence majors export as billions of dollars of military purchases may be impacted because of punitive measure. The US had announced sanctions against Russia under CAATSA for its alleged meddling in presidential election in 2016.

It is long-range air defence missile system is one of most advanced long-range defence systems in the world. It is referred to as SA-21 Growler by NATO.  It is an upgraded version of the S-300 defence system and is manufactured by Almaz-Antey. It has been in service in Russia since 2007.
It is capable of firing three types of missiles, creating layered defence, and simultaneously engaging 36 targets.  It has capability to destroy incoming all airborne targets at ranges of up to 400 km. With it, India can destroy Pakistani or Chinese aircrafts even when they are in their airspace.
China was first foreign country to seal a government-to-government deal with Russia to procure this lethal missile system in 2014. Russia already has started delivery of unknown number of the S-400 missile systems to China.