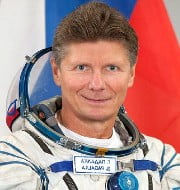 Russian cosmonaut Gennady Padalka has set a Guinness World Record for spending longest time in space with a total of 804 days as on July 2015.
With this he broke the previous record of 803 days, nine hours and 41 minutes set by Russian cosmonaut Sergei Krikalev (now retired) across six missions from 1998 to 2005.
Gennady Padalka’s Cosmonaut career