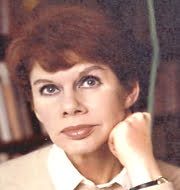 Renowned British author and art historian Anita Brookner passed away. She was 87.
Brookner had won the Booker in 1984 for her novel Hotel du Lac and was a bestselling author who had written around 25 books.