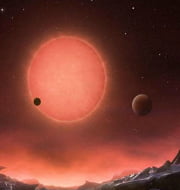 Scientists have detected dust belts around Proxima Centauri, a finding that indicates presence of elaborate planetary system hosted by closest star to solar system. These new observations were made by Atacama Large Millimeter Array (ALMA) observatory in Chile.

The new observations reveal emission from clouds of cold cosmic dust surrounding star. It revealed glow coming from cold dust in region between one to four times as far from Proxima Centauri as Earth is from Sun. It also reveals presence of even cooler outer dust belt and may indicate presence of system of planets. These structures are similar to much larger belts in solar system and are also expected to be made from particles of rock and ice that failed to form planets.

Atacama Large Millimetre/submillimetre Array (ALMA) Observatory is array of radio telescopes being deployed in Chile. It is composed of 66 high precision antennas that allow scientists to unravel important astronomical mysteries, in search of our Cosmic Origins. One of its goals is to image black hole.
It is an international partnership of European Southern Observatory (ESO), US National Science Foundation (NSF) and the National Institutes of Natural Sciences (NINS) of Japan, together with NRC (Canada), NSC and ASIAA (Taiwan), and KASI (Republic of Korea), in cooperation with Chile.