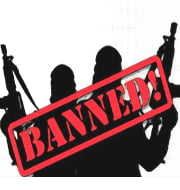 Pakistan has banned the Islamic State (IS) militant group which has undertaken vast stretches of Iraq and Syria in its control.
This decision was taken Pakistan Government on the recommendation of the Foreign Office, which regularly updates it about international militant groups banned by the United Nations (UN).

Why Pakistan is concerned about IS militant group?

India’s position on IS militant group

Union Government already has banned brutal terror group Islamic State under the provisions of Unlawful Activities (Prevention) Act, 1967 and following the provisions of section two of the United Nations (Security Council) Act, 1947.
India took this decision in December 2014 after UN has banned it under its sanctions regime of the Prevention and Suppression of Terrorism (Implementation of Security Council Resolutions) Order, 2007.