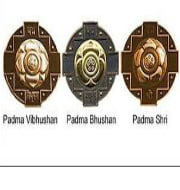 On the evening of 72nd Republic Day, India has honored 119 people from diverse field with the Padma Awards.

It is the third-highest civilian award in India. The award is preceded by the Bharat Ratna & Padma Vibhushan while followed by the Padma Shri. The award was Instituted on January 2, 1954.

It is the fourth-highest civilian award of India after Bharat Ratna, Padma Vibhushan and Padma Bhushan. It is awarded by the Government of India every year on the occasion of republic day since 1954.