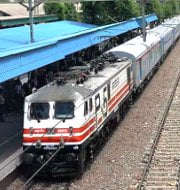 The Union Ministry of Railways has declared the Okha-Kanalus and the Porbandar-Wansjaliya railway sections of Gujarat as Green Train Corridors.
All trains passing on these 175-km long lines (141-km-long Okha-Kanalus route and the 34-km-long Porbandar-Wansjaliya route) are now equipped with bio-toilets.
On these routes, about 29 trains consisting of nearly 700 coaches have been equipped with bio-toilets to prevent open discharge free zone on tracks as part of the Swachh Bharat Mission.
What are Green Train Corridors?

Background
The Union Ministry of Railways has taken up a mammoth task of equipping human discharge free bio-toilets in all its coaches by 2021-22 in order to contribute to mission ‘Swachh Bharat Abhiyan’. It aims at completely stopping discharge of human waste from trains onto the ground in order improving cleanliness and hygiene
What are Biotoilets?