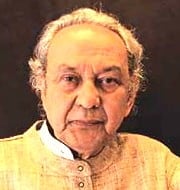 Noted artist Sayed Haider Raza was conferred with highest French Civilian Award Commandeur de la Lgion dHonneur (the Legion of Honour).
Raza was bestowed with this award for his peerless achievements in transcending all boundaries, forging ties between France and India and for continuing artistic quest straddling nations, religions, cultures and philosophies.
He was bestowed with this award on the occasion of the French National Day (14 July) celebrations by Ambassador of France to India Franois Richier on behalf of the French President.

About Legion of Honour