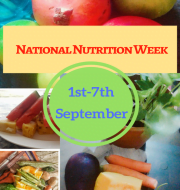 The National Nutrition Week will be observed throughout the country from 1st to 7th September. The theme of for year 2017 is “Optimal Infant & Young Child Feeding Practices: Better Child Health“.
The objective of this event is to intensify awareness generation on importance of nutrition for health which has an overall impact on development, productivity, economic growth and ultimately National development.

During this week, Food and Nutrition Board of Ministry of Women & Child Development will coordinate with concerned Department of the State/UT Governments, NGOs, National Institutions and organize State/UT Level Workshops, Functionaries, Orientation Training of Fields Awareness Generation Camps, Community meetings.
Moreover, large numbers of awareness activities were organized at state, district and village levels. One day workshops to sensitize and for capacity building of State/Districts Level officers on importance of nutrition for better health will be also held.
Mini exhibition on nutrition displaying low cost nutritious diets and its importance for different age groups will also be organized at grassroots level. Besides, awareness generation on weight management and its importance through Body Mass Index (MBI) will also be held for adolescent boys and girls.

Under nutrition in young children continues to be a major public health problem in India. Child born underweight has impaired immune function and increased risk of diseases in their later life. Malnourished children tend to have lower IQ and impaired cognitive ability, which affects their school performance and productivity in later life. According to the NFHS4, there is no improvement in the nutritional status, especially among women and children even though level of underweight has decreased by 6.8%, stunting by 9.6%, anaemia by 11% as compared to NNHS-3 figures.